Another year of being vegan and that much more happy!

Hello to everyone!  Woke up early this morning, so while Dave and Keaton were still sleeping,  I put on some coffee, turned on the t.v. and to my pleasant surprise, a good old classic movie was on to watch.  So there I lay cuddled in a blanket, overcast outside and the rest of the family lay in bed asleep.  I just felt good.
Now before I get a move on for the rest of the day, making a list, grocery shopping, etc., I want to celebrate with you another year of being vegan.  It's been 4 years now for me and 3 years for my 12 year old son.  We both couldn't be happier for this wonderful decision that we've made. 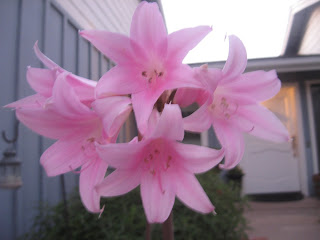 (Lillies in August, aren't they pretty!)
You may just want to grab yourself a cup of tea or lemonade and relax a bit while you read my journey to becoming vegan.

My journey-When I was about 15 I started having really bad stomach problems so my mom took me to a friend who practiced iridology.  It was pretty amazing what he saw and with this he put me on a two week herbal cleanse.  For a 15 year old it was brutal!  Vegetables with nothing on them, salads with no dressing except for lemon and these huge herbal pills that I had to take 3 times a day.  That's when I learned to swallow pills.  Hee hee!  My stomach problems did decrease and I decided to eliminate chicken and cows from my diet.  You see my dads sister had triple by-pass surgery,was diagnosed with diabetes and she continued to eat unhealthy no matter what the doctor said and she passed years later but in her early 60's.  My dads parents died at a young age, I never got to meet them.  Then one time when I was in Australia  I get a call that my dad just had a heart attack "but don't worry he is doing fine and he doesn't want you to rush home, there is nothing you can do", my mom said.  My dad was in his 50's!  Previously  he was diagnosed with diabetes.  I was scared!  I didn't want these things to happen to me.  Moving on...I continued to eat dairy and sea creatures and was still having stomach problems here and there, so I went to a doctor of Oriental Medicine who helped me.  It wasn't until I cut out the dairy about 7 years ago, except the occasional goat cheese or pizza, that really made a big difference on the way I felt, not to be gross or anything but I began to actually use the toilet everyday!

It was  4 years ago, when I read the China Study by Dr. T. Colin Campbell, on the way home from my brother's house in Arizona that I made the decision to stop eating all animals and animal by-products.  My husband's friend lent me the book, he was in his early 30's at the time with serious kidney problems and the doctor told him to cut down on his protein intake, it's too hard on the kidneys, yet he still eats alot of animal protein. (See one more scary health issue regarding eating animals). This book gives an amazing look at the medical field and how we eat truly plays a huge part on our physical well being/health.  (Just so you know T. Colin Campbell grew up on a Dairy Farm).  I also read some of the book to my husband on the drive home so when I told him I wasn't even going to cook animals at home, he wasn't too surprised.  He understood why and is very supportive of my decision. I wasn't going to be on medication for the rest of my life, to me that isn't lving a long and healthy life!

My next book I read was Diet for a New America by John Robbins, (son of Robbins, of Baskin-Robbins Ice cream),this showed not only about how food affects our health but about how the animals are treated and the affects all of this has on our earth.  Some parts were hard to read because of the descriptions of the treatments of animals, which I really never thought or knew about before, I cried many times throughout.  Truly I never knew how the animals being raised for food are treated and I felt so awful that all along I was playing a part in this because I was purchasing and eating these animals.  I was just as guilty as those who mistreat these animals. My dollars were going towards not only the cruelty, but the destroying and polluting of our earth!  A wonderful story I'd like to share that I read on John Robbins site is called "The Pig Farmer" and it's a very moving and touching story of a real pig farmer who changed his ways.

My next  move....what was I going to cook?  I was the one who did all of the cooking and since I was no longer going to cook up any animals I had to have a plan!  I started looking on the internet and I came across a wonderful website called Compassionate Cooks by an awesome woman, Colleen-Patrick Goudreau, and she had these podcasts that you could listen to and recipes listed you could purchase.  The podcasts were so helpful, she answered so many questions like, "The Protein Myth and Vegetarianism", "Where do I get my calcium?", and so much more!  I listened to them so quickly and all the while playing them for my son too.  I highly recommend her podcasts.

Regarding my son.  He became so angry and broke down when he found out how the animals are being treated for food.  He said  " I don't understand why they would do this to them".  Just thinking back on his reaction to all of this makes me want to cry. He was just so so angry!  I know some people think we shouldn't tell our kids about these things and that they should just eat the chicken and drink the cows milk because that's what we all do.  Or even if we become vegan some parents say that we can't make the choice for them to become vegan as well.  Well we've already made the choice, we feed them milk and serve them up chickens and cows.  Why not make a healthier and more kinder choice for them, and teach them that the
food they are eating comes from the ground, has no hurtfull chemicals in it and no animals are ever harmed. Doesn't that sound good?

So that is how I became vegan!  I now eat so much better and try so many more foods than I ever had.  I love kale!  My son finally has a liking for it as well.  So when people ask what I eat,  I can't reply so quickly because there is so much that I eat!  My husband isn't vegan, only at home.  He says, and I've probably quoted him before "if it tastes good I'll eat it".  There isn't too many things he hasn't liked that I've made.  He even eats our cheeseless pizza we buy or make.  He even walked with my son and I for the Farm Sanctuary.  I hope someday he decides to go vegan.  I know it would be so much healthier for him and I want him to be around for a long time.   It would also be nice to have that much more in common then we would be a complete family of vegans!  I like the sounds of that.

If you think you couldn't give up cheese or something like that well, my belief is...if you truly want to do something and set your mind to it, you can do it.  It seems like there is dairy in almost every food out there.  When you decide to go vegan your palate eventually changes and there is so much to truly taste! There are vegan cookbooks galore now and so many recipes here on the internet and so many wonderful blogs.
I was so excited and still am when I make cookies or even a cake and I don't have to use eggs or butter.
I never knew before that this was possible!

If you haven't made the move yet to being vegan and have any questions don't hesitate to send me an e-mail or I'm sure any of the people out there who have these amazing vegan blogs would surely be happy to answer any questions.

Until next post.  Have a wonderful weekend and reflect.
Posted by dreaminitvegan at 12:21 PM