It's a beautiful day today and also one to thank all those vets who have served our country  and those men and women that are still doing so today.  Most of us know someone who has put their lives on the line.  My husband's second cousin who is 23yrs old who just finished up Army boot camp is on his way to Afghanistan.  We are thinking of him today and hoping he stays out of harms way.   While I have my own feelings on war I will not get into that.
Now I'll move on to the food!  How does GF-Strawberry Muffins sound? 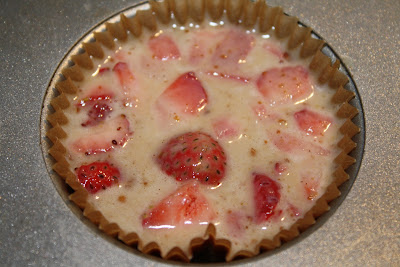 This is pre-baked, obviously. I like to use the Vanilla Gluten Freedom Cupcakes from VCTOW...
but with some changes. 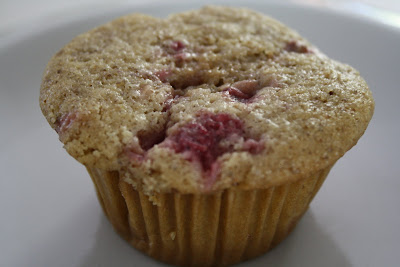 I originally was going to frost these but they turned out more like a muffin...or so I thought.  These would make a great breakfast muffin.  These came out really light and airy.
The changes I made were...
eliminating the almond extract/decreased the sugar to 1/2 c.
1/3 C. millet flour instead of corn flour
1/2 C. sorghum flour instead of quinoa flour
1 C. chopped fresh strawberries added at the end....fold in gently until well combined.
Next up...dinner. 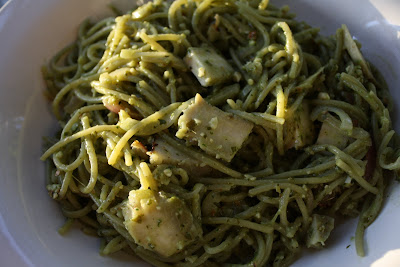 Spinach Pasta with Cilantro Pesto and Grilled Artichokes
This recipe was taken from Veganomicon but I used GF-spinach pasta and I used fresh artichokes. Since artichokes are now in season I used them and then grilling them really made the dish more fresh tasting.  The cilantro pesto that has basil in it is really nice too.  This also tastes good cold the next day.
Are there any other ways you all use fresh artichokes?  Anyone have a vegan stuffed artichoke recipe?  I'm trying to come up with one.
Enjoy your day!
Posted by dreaminitvegan at 9:39 AM 5 comments:

Farmers market is starting to have an abundance of spring veggies and fruits.  Also beautiful flowers!  I can't help myself, I just can't pass up the gerbera daisies, so many colors to choose from!  What are some of the things you can't pass up at the Farmers Market 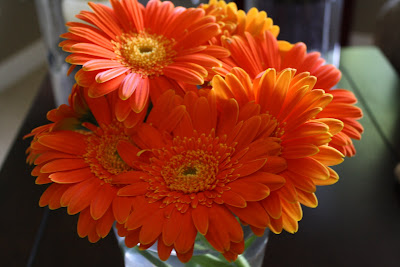 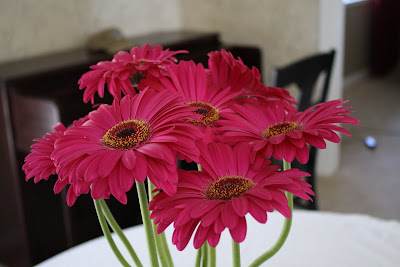 Fava beans anyone?  My goal is to try things I've never tried before and the fava bean is one of them.
With all of the recipes I've seen using fava beans I decided to grill them. First I washed, dried and put them in a bowl.  I drizzled some olive oil, coarse salt, pepper, cilantro and a squeeze of lemon.  It doesn't take long to grill them about 6 or 7 minutes, flipping them once as they grill..  What was the verdict on tasting the finished product?  Not bad, not my favorite, but not bad.  They remind me of lima beans, which I don't like and never have, but better.  I don't know if I'll buy them again but I would eat them if someone had them. 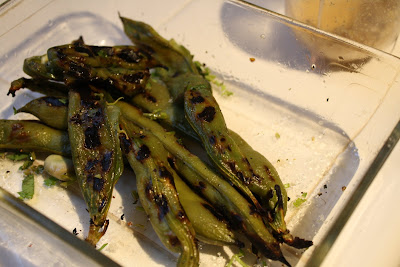 Butter Romaine lettuce that looks like a flower when I opened it to drain the water out.  This has such a nice flavor. 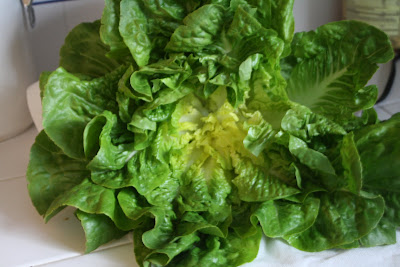 Pea shoots and dried garbanzo beans are also finds at the market. 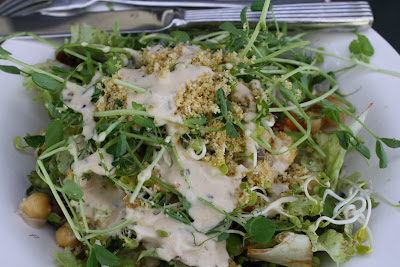 A happy Mother's Day to all of you mother's out there! 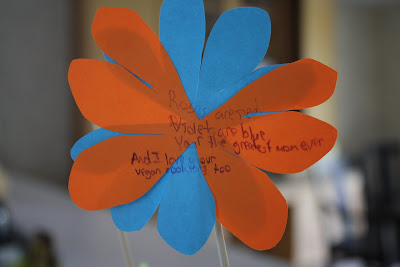 Keaton is in 7th grade and still making homemade crafts for me.  This saying is too cute!
"Roses are red, Violets are blue, You're the greatest mom ever, And I love your vegan cooking too" 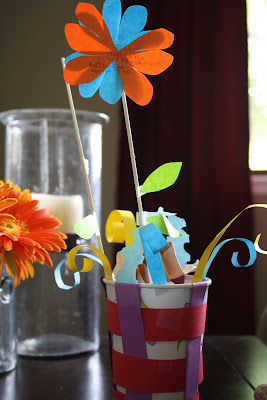 This month of May is starting off beautifully!

This past weekend was a busy one for us.  My in-laws and grandmother-in-law came up last Thursday and stayed until Sunday.  Friday was grandparents day/Greek Festival at Keaton's school.  Then on Saturday we celebrated my in-laws 45th wedding anniversary.  We took them to see Keaton's guitar teacher's band play  and then had some friends drive up to surprise them and stay over to celebrate with us. They were truly surprised so that worked out perfectly!!!  Then on Sunday we all went to breakfast then everyone went home.  The house was so quiet after that.

Since it was so beautiful out and I didn't want to laze around inside the 3 of us headed up to Cold Springs Tavern to listen to some live music and have a drink.  We ended up meeting a Russian couple along with their son and it ends up the husband is the bass player for a popular Russian band called Mumiy Troll. Of course when we got home we had to look that band up on line.  lol! They were really nice people and love it here in America.

Oh and Cleo turned 8 on May 1st as well.  I don't know how the rope toy got around her neck but she didn't seem to mind it. 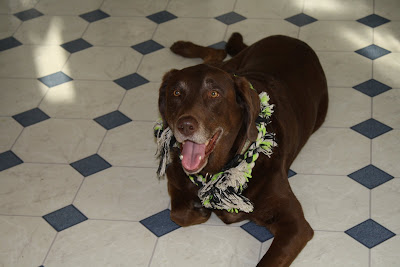 Yesterday when I went to pick up Cleo's dog food  I found these cool doggy snacks. 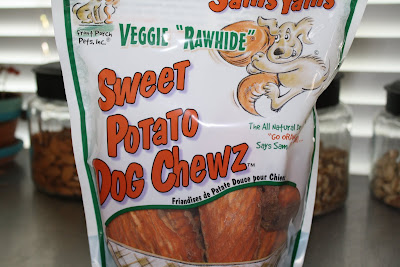 Dehydrated sweet potato.  At least it takes them a few minutes to chew these up instead of one or two crunches then they're gone. 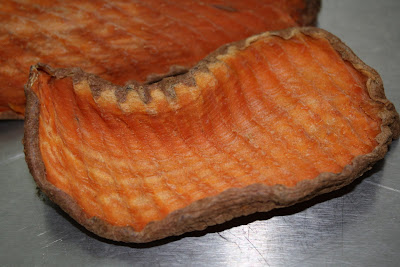 Alter Eco Pacific white and red quinoa.  This is before it was cooked. 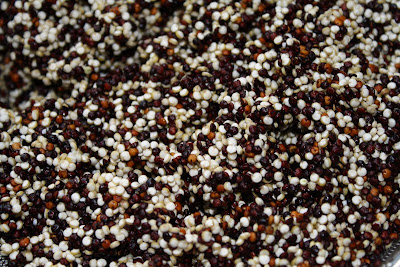 I mixed the white quinoa with the red and look how pretty this is.  This is after it was cooked. 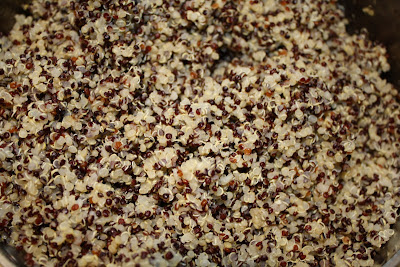 A few weeks ago I saw Cheryl Crow on a morning show along with a Chef that she made a cookbook with.  The recipe they showed was one for Quinoa Stuffed Pablano Peppers. 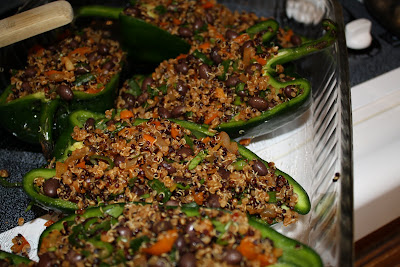 When they are cooked and plated it's so pretty.  What I liked about this recipe is that it's a really light meal do to using quinoa instead of rice.  So it is perfect for Spring or Summer.  This is probably the first time I followed a recipe exactly, well pretty much. lol!  It was kind of on the bland side I think because there is no salt used.  I ended up adding just a bit of salt because I felt it needed it and next time I would adjust the seasonings and kick up the heat.  Oh and I didn't use any type of cheese on top.

I loved the Romesco Sauce but it needed a bit more heat and a bit of salt as well.  I didn't want the leftover sauce to go to waste so I was using it on everything from wraps to veggie "sushi" rolls.  I'll definitely make this sauce again 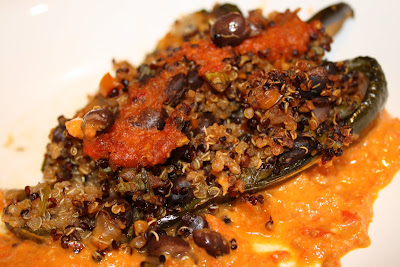 You can find the recipe for this dish by clicking here.
Posted by dreaminitvegan at 10:59 AM 4 comments: