Whew!  It's that time of year again when we are all figuring out what to make for Thanksgiving.

The other night I made the Roasted Root Vegetable Enchiladas with the Chipotle Cashew Cream from VegNews 2008.  Talk about AMAZING!  One more Enchilada recipe on my list of favorites. 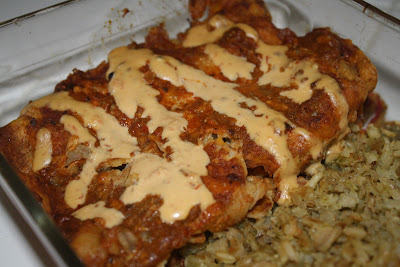 Don't these look soooo goood?  These are some left overs that I packed for Dave's lunch along with Cilantro-Lime Brown Rice which is a favorite of ours.
I know there are those of you who turn your noses at cilantro but we love it. lol!
The recipes for all 3 are down below. You can make everything in advance too.

In some of the parenthesis there I wrote what I used or added to original Enchilada recipe.

Spread veggies evenly on prepared sheet pan. Roast for 50 minutes, or until soft and lightly browned, flipping mixture after 25 minutes.

Remove from oven, let cool for 10 minutes and in a large bowl toss roasted veggies with 1 cup of cashew cream. Turn oven down to 350.

In a shallow plate, pour roughly half the enchilada sauce. Dip a tortilla into sauce to coat each side, spread 1/4 cup of roasted veggies into the tortilla, roll up tightly, and place into a 9x13-inch glass baking dish, seam side down. Continue with remaining tortillas, fitting two rows of five enchiladas each.

Pour remaining enchilada sauce over rolled enchiladas, and drizzle with remaining 1/2 cup cashew cream. Bake uncovered for 10 minutes to heat and lightly brown the cashew cream.
(You could also add a white or black bean to this as well)

1 cup raw cashews
1 cup water
1 canned chipotle pepper(I only used about 2 chipotles because it can be extremely hot by adding a whole can.  Use your own judgement on this ingredient)
3 Tbsp nutritional yeast
1/2 tsp salt
1/4 tsp black pepper

In a blender puree all ingredients until smooth.

Preheat oven to 425 degrees. In a blender puree onion, cilantro, garlic, salt, pepper, lime zest and juice, and water.
In a medium saucepan over medium heat, add olive oil and rice, and lightly toast for 3-5 minutes. Stir in cilantro mixture. Cover and bring to a boil over high heat.  When the rice boils, place saucepan into oven and bake for 50 minutes. Remove and let sit covered for 10 minutes. Remove cover and fluff rice with fork before serving.  (I like to transfer the mixture into a baking dish with a lid before I bake in the oven).

Homemade Red Enchilada Sauce
This is  how you make it:

4-5 Lg garlic cloves, minced
1 T. cumin
Grind if you want this smooth or just stir together until well mixed.

Heat a thin layer of oil to cover entire skillet(this doesn't have to be very thick).
Once heated whisk in a 1 oz. pkg of California Chili Powder(or another mild chili powder).
Then whisk in 2 T. flour.  Continue whisking and add in the garlic cumin mix.  Next add vegetable broth to create the consistency you desire.
Wallah!  A quick and easy enchilada sauce that's alot less expensive than a canned version.

Smell the garlic and onions.  Feel the warmth as you step inside your house from the cold weather. Doesn't that sound so nice?
I was so happy to finally check out Eat to Live by Joel Fuhrman, MD from our library.
Now I need to buy it because I wasn't able to re-check it out due to other holds on it.  Bummer!
Dr. Fuhrman writes about the science of how food works in the body and how you should consume as many nutrients as you can in each meal.  I was able to make a few recipes which were all very flavorful and packed with veggies.  Dave and Keaton really loved all of these recipes too. 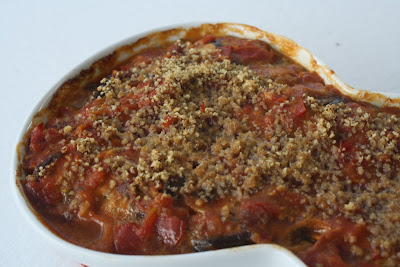 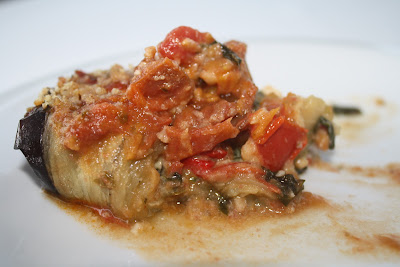 Eggplant Rollups
These were more flavorful than the tofu ricotta spinach ones I usually make.  Next time I'm doubling the recipe because they were eaten way to quickly.
Towards the end of summer my heirloom tomatoes were abundant so I was able to use them up by making lots of marinara sauce which I used in both of these recipes.  Dave actually had his fill of tomatoes because I was using them on a daily basis.  Personally I don't think you can eat too many tomatoes. 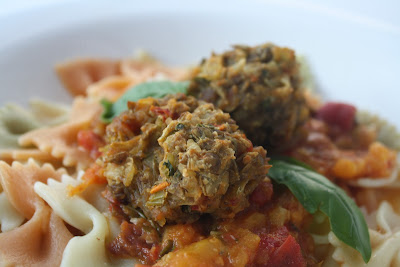 No-Meat Balls
from Eat to Live
Makes 16-18 balls
1-2 T. water or low or no salt sodium vegetable broth
1/2 C. diced onion
3 garlic cloves, minced
1/4 C. diced celery
2 T. parsley, minced
1/4 tsp. dried sage
1 tsp.dried basil
1 tsp. dried oregano
1 1/2 C. cooked lentils or 1 15 oz. can lentils
1/4 C. cooked brown rice (I needed to use 1/2C.)
2-3 T. tomato paste
1 T. arrowroot powder or whole wheat flour
2 T. Dr Fuhrman's MatoZest or other no-salt seasoning
2 T. nutritional yeast
ground pepper to taste
optional: vital wheat gluten for a chewier consistency
Preheat oven to 350 degrees.  In a saute pan heat 1-2 T. water or broth.  Add onion and garlic and saute for 5 min or so.  Add celery, parsley, sage, basil and oregano.  Saute for another 5min. adding more water or broth as needed to prevent sticking.
In mixing bowl  combine sauteed vegetables with remaining ingredients.  Mix well.
Mash lightly with tomato masher.  With wet hands for 2 T. of mixture into a smooth ball.  Place on very lightly oiled baking pan and bake for 30-40min.  (I used a spray oil for pan and then lightly sprayed the balls).
Serving suggestions:  serve with marinara, over pasta or as a sandwich filling.
Have you tried any recipes from Eat to Live?  How did you like them?
Have a great weekend and stay warm and dry!
Posted by dreaminitvegan at 12:18 PM 5 comments:

Previous post: 4 ingredient African Stew for under $8.  I hope you all check it out and try it.

I was awarded the Liebster Blog Award by Nuestracena-Vegan Cuisine  who is just too sweet.

"Liebster" in German means 'dearest' or 'beloved'.  In this case I think it means 'favorite'.

The rules of winning this award are as follows:
1. Show your thanks to those who gave you the award by linking back to them.
2. Reveal 5 of your top picks and let them know by leaving a comment on their blog.
3. Post the award on your blog.
4. Enjoy the love and support of some wonderful people on the www!

I get so much from all of your blogs and it's so nice to see the vegan love all around us.  Every blog is special but there are always those that stand out to each of us a bit more.  The following blogs do that for me.

happyveganface - Jessy always seems to bring a smile to my face when I read her blogs and with her comments too.  Along with her wonderful GF recipes.
VegSpinz - she always amazes me with her food art and original recipes
MELOMEALS: $3.33 A DAY - fresh, colorful, nutritious meals for under $3.33.
seitan is my motor - lots of beautiful and original baked goods

Since my last post was a meal under $8 I thought I'd reshare the Quinoa Basil Tofu that cost's under $7 to make.  See vegan food doesn't have to cost much.
Have a great day!
Posted by dreaminitvegan at 10:16 AM 3 comments:

Good chilly afternoon everyone!  Hope you are all staying toasty and warm.  I think we just may put a fire on tonight.
A couple of  months ago a co-worker of Dave's invited us over for dinner.
They know Keaton and I are vegan and Dave was told not to worry about the meal that they were making a meal they usually  make but with changes to accomadate us.  To our surprise the whole meal was vegan.
We had a lovely mixed green salad with fresh berries and a light vinaigrette.  Then the main meal was a very delicious... 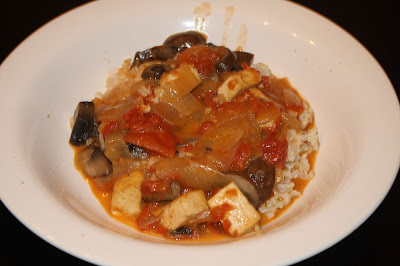 African Stew with Portobello Mushrooms
We kept talking about how good this meal was I had to get the recipe.
To my surprise there was only 4 ingredients listed in the recipe. 4 ingredients!  I couldn't believe it!
You serve this over a nice bed of brown rice and wallah!  The key to this recipe is letting it cook over a low heat for a couple of hours to let the tomatoes really melt down and the flavors mingle together.  I think this would be a great to make in a crockpot.  Sometimes simple is better and this dish is wonderful left alone without any fancy spices.  Although it makes a great base for adding other veggies, I still like the simplicity for a change.  It makes 4-5 servings. This would be an easy recipe to double for company.  It cost's less than $8 to make.
African Stew
by Eulalia
1)  3 large yellow onions chopped and cooked in olive oil or water for about 45min on low heat until soft and start to sweeten.
2) Add 2 16 oz. cans of stewed tomatoes, drained( I like a bit more tomato so I used 1 28 oz can  + 1 16 oz. can.- if you can't find stewed just add whole plum tomatoes in a can
3)  Add 2 cans of coconut milk(I used lite just because I had it on hand but using regular would give it a bit more thicker consistency and an even richer flavor. The boys loved it with the lite milk just as much)
4) Allow to cook together at least 30 min on low heat.( I found that cooking it for a couple of hours  really helped develop the flavors more and cooked the tomatoes better.)Note- as this cooks you want the tomatoes to break down into it so you can use the back of a spoon or something to help do this.
5) Once cooked through add salt and pepper to taste.
6) At this point add mushrooms, tofu or anything else. ( I sauteed 8 oz. of portobellos and 8 oz. cubed firm tofu I broil on low until almost golden).  Let cook for about 15 or more minute until ready to serve.
Let me know how you like it! 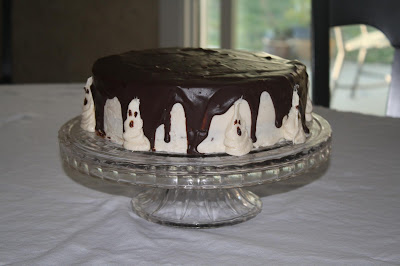 This was my Halloween Birtthday cake I made for myself.  Chocolate cake, chocolate rice mellow creme filling, thin layer of white frosting and topped with chocolate ganache.  The ghosts are made with rice mellow creme.  I found a recipe at Annie's Eats for a marshmallow filling and adjusted it to a vegan recipe.   My go to chocolate cake recipe is down below.

Sift the flour, cocoa, baking soda, salt and sugar into an big bowl.
In a separate bowl,mix the oil, water or coffee and vanilla.
Add the liquid ingredients to the dry ingredients and mix the batter just until incorporated.

Transfer the batter into an 8/9 inch round pan... or two if you doubled the recipe.
Bake for 25-30 minutes until cake tester/ toothpick comes out clean or the top springs back when touched. Cool completely.


Beat together the Earth Balance and confectioners sugar.  Then add in rice mellow creme and vanilla extract.  Beat until smooth and fluffy.
This is so nice and light in between the layers of cake.

This is my first time using Rice Mellow Creme.  Have you used it before?
Posted by dreaminitvegan at 6:37 PM 7 comments: