Hello everyone!  Hope you all have been having a good summer so far.  The heat has been kicking in out here in California.  How is it in your area of the world?

I've been packing for our move in 2 weeks which isn't something I would like to be doing. The house we are in was put up for sale, which is a bummer because we're pretty comfortable here.  Luckily we found a new house rather quickly and it's actually closer in town.

On another note a while back my son Keaton was having ear problems for about 1 1/2 years, constant ear pain and ear pressure along with bouts of fluid in his ears.  His ear problems actually started around age 5 then as he got older they were becoming more frequent along with ear infections and then about 1 1/2 years ago it got really bad with the issues I mentioned above.  He had allergy tests which came up with nothing, although she didn't do a food allergy test.  His pediatrician and the E.N.T. Dr. said the only option left would be to put tubes in his ears.  Ear tubes at the age of 14, I don't think so.  I decided to try another doctor and I found a osteopathic doctor who said he didn't need tubes and a Naturopath which helped us start to build up his immune system and hat we should get him off gluten because he has had stomach issues for quite a few years as well.   Keaton and I had a suspicion  he was sensitive to wheat because of his stomach pain but he wasn't consistent with eliminating it all together.  As I was doing research on wheat/gluten intolerance I found that it does cause damage to the immune system and can cause ear pressure/infections.  I discussed this info. with Keaton and he agreed to do anything to stop the pain.  It's been almost 2 months now and how is he doing?  He is ear and stomach pain free!!!!  He just got a physical and the doctor said his ears look great!

This is where I have to stock up on gluten free foods for the kid.  The first thing to buy would be a great tasting gf vegan bread that I can locally, yet there are only the heavy rice bread options.  Blah! The best tasting gf vegan bread I've found so far is Sami's Bakery(I've mentioned in an older post) located in Florida!  Seriously it's the best tasting bread and now they have burger buns and bagels.  Oh yah and also wraps!  The bummer about ordering from here is that if you want 2 day delivery it's very expensive so I get the standard delivery which from the time of order to arrival can take a good week so I order extra and freeze it.  Check out the bun below which has a Dr. Praeger's Veg. Patty in between. Keaton raves about these buns and says they are better than any non gf bun he's ever eaten. I have to agree with him these buns taste amazing! 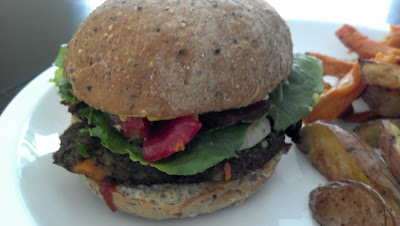 Sami's Bakery Burger Buns
I did recently find another bakery which is actually located out here in California that is now making gf vegan breads and I am hoping they taste just as good.  My son will be trying it out for the first time while he is visiting his grandparents.  We'll let you know more about it when he gets back.
As far as finding other gf foods, there are so many more options out there nowadays, some are good some not so good.   Pastas: our favorite is Ancient Harvest Quinoa Pasta it holds it's shape and also does well reheated up. As far as a rice pasta we like Jovial Brown Rice Pasta﻿ which has a great texture but is a bit pricier but worth it.  Gf vegan burgers: Sunshine Burgers, Dr. Praeger's and there is a new one we tried from Health is Wealth Sprouted Grain Burgers that tastes really good although it might not look it would.  They do contain soy but there was only 2 boxes left on the shelf so I figured it had to taste good.  Oh and check out this find... 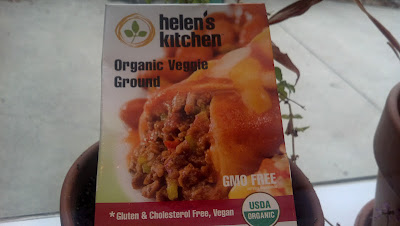 Helen's Kitchen Organic Veggie Ground
I noticed this new product next to the other veggie ground products so I picked it up and noticed it was gf and vegan so I snagged a package to try.   I decided to use it as a taco filling so upon opening it up that it was very moist but this did cook out the longer I cooked it.  It has a really nice flavor without adding any seasoning but I used it to make taco's so I added taco seasoning to it.  I was pleasantly surprised with this product and highly recommend it to anyone who has been wanting to use crumbles but can't do to being gluten free.
So this is just some of our favorite products that I buy the rest I make.

Speaking of things I make.   I recently made the best gf pie crust that turned out fabulous as well as the pizza crust from Great Gluten-Free Vegan Eats by Allyson Kramer which I won over at Happy Vegan Face...thanks Jessy I'm loving the new cookbook!  The pizza crust also has a great taste as well. 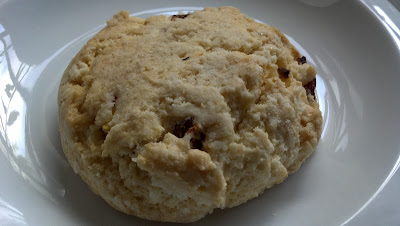 What are some of your favorite gf products/foods?
Next post will be a raw e-book giveaway!
Posted by dreaminitvegan at 11:18 AM 12 comments: