My son just turned 14 yesterday.  How the years pass so quickly.  We took him to see Sherlock Holmes 2 last night.  What a great flick!  Just as good if not better than the first.  We don't get out to the movies much, but stream it to our t.v. or watch on dvd's.  Are there any you have seen recently that you would recommend? 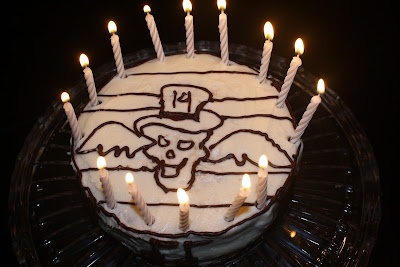 My son plays guitar and so my idea for decorating his birthday cake was to
use the design of his guitar. His guitar is a Schecter Synester Gates, it's black and white and on the neck it has the deathbat(skull with bat wings).  In my mind I pictured this amazing looking cake....in the end it looked like this.   He said it looked amazing...what a kind child he is. ha ha!  Hey the idea was there!  I went online to look up more Synester Gate skulls and found the one with the hat, then I added the bat wings.  Note to self: buy a book on cake decorating or take a class or two.
I usually make cakes from scratch but I was low on gf flours so I thought I would try a packaged mix.  I already had a gf mix in mind so it was on to reading reviews!.  End result-Wholesome Chow Chocolate Lavender Cake.  Our local health food store was out of the white and chocolate mixes so that's why the choclate lavender was made.  The verdict on this cake is 2 thumbs up!  The texture is really nice, doesn't fall apart and is moist.  The lavender is perfect in this too!  When it comes to cost...one cake mix cost about $5.99 and it makes one 9-inch cake.  I used 2 6-inch cake pans so I was able to make a layer cake other wise it would have cost me about $12 to make a 9-inch layer cake.   So it isn't cheap by any means, although gf mixes aren't cheap.  So if you aren't up for making a cake from scratch or just want to keep a mix on hand I highly recommend Wholesome Chow.  The reviews on their Gluten Free All Purpose Pancake Mix were really good too.  That will be my next purchase.
I tried Bobs Red Mill GF Pizza Crust Mix the other day that tasted really good too!  Have any of you tried that before?  Are there any favorite GF mixes that you  like?  I'm not a fan of using garbanzo flour in my baked goods...just thought I'd add that bit in.
Some of you may know that my son, Keaton, has had stomache issues and so after seeing the Naturopathic Doctor last month, she said to eliminate soy then wheat to see which one was the culprit.  The elimination of soy didn't change his symptoms, it's looking like it is wheat.

I decided to take Keaton in to see a Naturapathioc Doctor because he was having other health issues and I didn't like what the pediatrician was recommending.  Next week is Keaton's one month check up with the Naturopathic Dr. I'll give you more info. about why we went in to see her and how Keaton's health is doing.

Have a wonderful day!  It's still sunny out here in California but could we use some rain!
Posted by dreaminitvegan at 11:14 AM