Whew it's been a busy end of the school year.  One more week to go!

Recently the parents of the school put on an African inspired luncheon for the the teachers and staff.  All of the recipes were of African origin so from the list of recipes to make I chose the slaw which was easy to veganize due to switching out the mayo for veganaise. I'm really anxious to try to veganize the meatballs they made because everyone raved about them.  The slaw was a hit as well and I will post about it later.  In the meantime here is a wonderful African dish I found online that is so freakin easy to make and tasty. 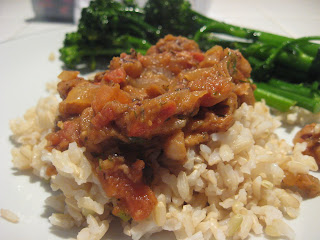 This is called Wake-Ewa(black eyed beans/peas in a sauce).  Black eyed beans are so quick to make from scratch, they only take about an hour to cook after you soak them and I do a quick soak at that which only takes 2 hours. Beans are a great way to save money, they are very easy to make and you don't get any bpa from those cans.   This sauce doesn't really consist of much, but it's amazing how it comes out with a  rich and creamy taste due to the beans.
It's a filling and very economical meal to make.  Dave and Keaton had seconds so it makes for a good size portion.
Here's the recipe below with a couple of changes from moi!
Wake ewa
Serves 4
3C. cooked black eyed beans
1 Large sweet or yellow onion(half thinly sliced the other grated)
1 garlic clove, minced
2-3 T. olive oil
1 tsp. chilli powder
1 T. fresh cilantro or 1tsp. coriander ground
1 1/2 tsp. thyme
3 Large tomatoes, diced
dash of sugar
salt to taste ( I found you don't need much salt in this)
In a pan heat the oil then add sliced onions and saute until translucent then add the garlic for another minute.  In the meantime add the grated onion chilli powder, cilantro or coriander, thyme and tomatoes in a bowl and stir together.  When the onion garlic mixture is cooked add the tomato mixture and stir often for about 10min or so, until the tomatoes cook down and flavors begin to meld together.  Next add the black eyed peas, mash slightly and add the sugar and salt.  Stir and cook for another 5-10 min.  Serve over brown rice. 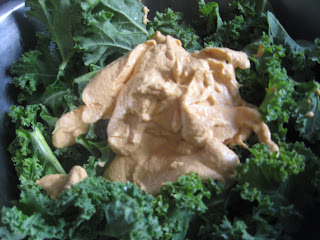 I finally made Kale Chips with nooch and oh these things are addicting. Above is the consistency of the sauce poured over the kale.  I thought these kale chips would be another great way for Keaton to eat Kale but he said he would rather eat a kale salad.  Hey I'm fine with that, I actually prefer he eat raw kale anyways.  So I guess I get to eat all of these chips. YAY!  The recipe I found was at The Fresh Network Blog but I noticed Gina at Choosing Raw subbed the bell pepper for cherry tomatoes.  So with that being said I subbed that for a regular large tomato and it worked out really well. 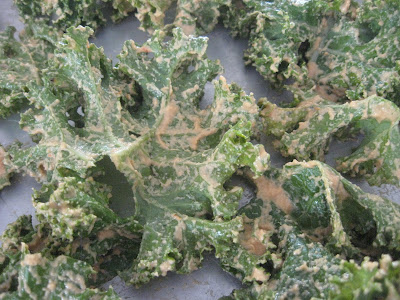 These are before they were baked. 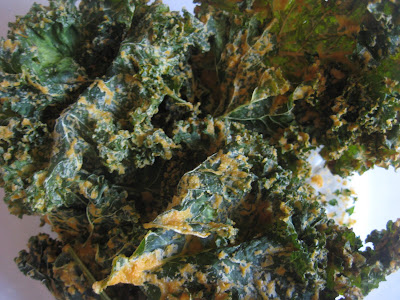 Kale chips when they are done baking.
What do do?
Soak 1C. cashews for 4hrs or overnight then rinse. Wash a bunch of kale, break into pieces and put in a large bowl, set aside.  In a food processor add the cashews, 1 chopped tomato or red bell pepper, 1/4-1/3C. Nutritional yeast, juice of a lemon, Himalayan salt to taste.  Blend until smooth.
Pour the cashew sauce over kale and stir until coated. I don't have a dehydrator so I placed the kale chips on two cookie sheets and baked in a 175degree oven with the door open for about 3-4 hours,or until crisp.
I hope you try these.
Have a wonderful day!
Posted by dreaminitvegan at 12:22 PM