When will it stop? Also gf cupcakes and more...

I sit here typing and thinking at this very moment about all of the animals that are being abused, right this minute!   All around this country!  Some of us don't realize it's happening, I didn't  until a few years ago, and some of us know but turn a blind eye not wanting to know anymore because than they would have to deal with it.   By purchasing animal products, meat, dairy and eggs, we are actually saying this abuse is okay. Some of you may think that's extreme to say but  if you know what's happening to these animals but still choose to buy the products that come from these animals than you are saying it's okay.  I still have tears in my eyes from watching yet another, very disturbing video of a dairy farm in Ohio abusing their cows and calves.  You can watch it at Mercy for Animals or click on the video below.  Like I said this is graphic.

The people in the video, their behavior is very disturbing and I think if they are acting out on these animals they could act out in a violent way towards human beings.  It's terrible to think about the terror and pain these animals are suffering from when they have done nothing wrong, innocent victims.  Buying "grass-fed", "free-range" and "organic" animal products doesn't mean that the animals weren't abused, they are still taken to a slaughter house and they can do what they want to these animals while they are there.  This has to stop and it can only if we make a choice to change.
There are so many books, cookbooks and info out there to help with making the change to that of a plant based and compassionate diet. If you truly want to stop this kind of abuse you will stop buying animal products.  It's that simple. 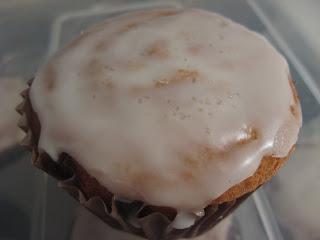 Now for a lighter tone, how about some GF lemon cupcakes.  The recipe I used was the Gluten Freedom Vanilla Cupcakes from VCTOW.  The only changes were I used sorghum flour instead corn/almond flour and add some lemon juice and lemon zest.  The glaze on top is just organic powdered sugar and lemon juice. 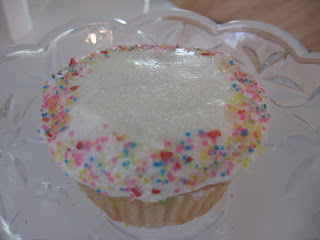 This past weekend went back to our hometown to attend a going away party for some friends, which was a really good time.  Since they are big time margarita drinkers I thought it was the perfect time to make the Margarita Cupcakes from VCTOW.  These are so freakin good!  The cupcake part is a bit like a spongecake and at first I didn't know if I liked it.  When they completely cooled and I spread the frosting on them, it all came together.  The frosting is limey and tastes like a blended margarita, yum!  It also makes alot and is a bit on the thinner side so in the future I will frost the day of the party.  Our good friends that we stayed with, the husband Chad is vegetarian, made a big pot of vegan chilli for everyone and added some cinnamon which gave it a different flavor, but it was nice and it worked!  It's always kind of fun to change things up sometimes. 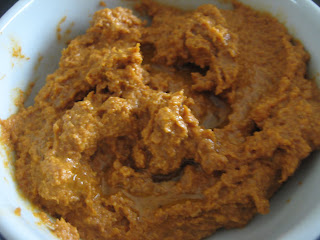 This was also my first attempt at the Muhumarra Dip from the Vegan Table and I'm addicted.  This also went over very well.  I served it with pita triangles and cut up vegetables.  In the dip I used GF bread crumbs.  The recipe I found was also online so I posted below.
Muhammara (Roasted Red Pepper and Walnut Spread)
By Compassionate Cooks
Colleen Patrick Goudreau
Ingredients

2/3 cup bread crumbs (see below to make your own)

down the sides of your blender/food processor, and make sure all of the ingredients are

*Most recipes for Muhammara call for olive oil; I don’t think it’s necessary, but feel free to

drizzle some in while you’re pureeing the rest of the ingredients.

*Make it the day before serving to allow the flavors to mingle.

To make your own bread crumbs: Place some bread (stale bread works great) in the oven until it’s

crispy but not really browned – at 300 degrees). Let it cool, then add it to your food processor

until it is reduced to crumbs. Add Italian herbs such as dried oregano, thyme, basil, marjoram,

Enjoy your day!
Posted by dreaminitvegan at 11:31 AM