It's a beautful day out I hope everyone is enjoying it!

Here is a new photo of our California Poppys and Sweet Peas in our backyard. The poppys just recede and grow wild while the sweet peas I have planted years ago and keep coming up year after year.  I love sweetpeas, they smell so good!  What is your favorite spring flower? 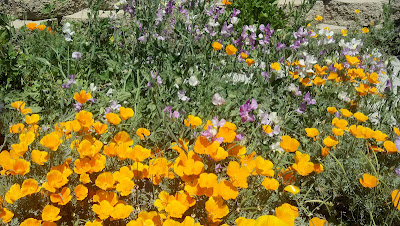 Before I head back outside a quick post about a yummy GF pasta dish I made recently. 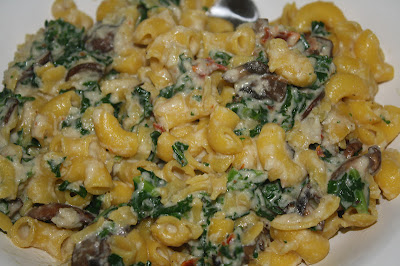 This recipe is taken from Chloe's Kitchen by Chloe Chloe Coscarelli, Fettucine Alfredo w/Shitake Mushrooms, Kale and Sun-dried Tomatoes.  The sauce is a base of homemade almond milk that is so easy to make.  You suppose you could try to use use storebought almond milk.  If you do let me know how it worked.  The recipe is below and the only I subbed is using the gf pasta, and I had baby bella mushrooms because I had them in the fridge.

Directions:
Cook the fettuccine according to the package directions.

In a large skillet, saute mushrooms in olive oil over medium-high heat. Season with salt and pepper and cook until they are soft and lightly browned.

Blanch and shock the kale so that it stays bright green. To do this, add the chopped kale into a pot of boiling salted water and stir for 15 seconds. Immediately drain and plunge the kale into ice water. Let it chill, then drain again.

For Almond Alfredo Sauce:
Heat about 4 cups water in a medium saucepot until boiling. Add the almonds to the boiling water and cook for 5 minutes. Drain the almonds, and with your fingers, peel the almonds and discard the skins.

In a large skillet, saute the onions with oil, salt, and pepper until soft and translucent. Add the garlic and let cook a few more minutes. Remove from heat and set aside.

Blend the skinless boiled almonds with 2 cups water until smooth, then strain through a colander lined with cheesecloth (a paper towel also works) set over a bowl or use a fine mesh sieve. Discard the solids. Return the almond milk to the blender and process with the onion mixture and miso. Season with salt and pepper, to taste. Before use, heat the sauce over a very low flame until hot.

Until next time take time to stop and smell the flowers!
Posted by dreaminitvegan at 1:59 PM