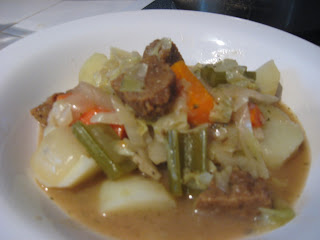 For St. Patty's day my mother-in-law used to make my son Corned beef and cabbage in his pre-vegan days. So his first year as a vegan I found a vegan recipe for it and it was just okay. This years recipe is a keeper! I've never eaten it before so I didn't know what it really was supposed to taste like, but I was given the thumbs up on this one.
I used the "Vegan Corned beef" recipe from
Vegan Dad, but added some fennel and a bit of molasses to it. This recipe is so good, my son said it tastes so much better than last years recipe.
Then I used Susan's recipe at Fatfree Kitchen for the rest of the recipe. I boiled some potatoes and added it to it at the end.
Posted by dreaminitvegan at 7:49 PM