Take a hike and Quinoa Salad

Happy Saturday morning to you.  I hope you are all having a great weekend.  It's supposed to rain tomorrow.  I'd rather it be sunny but I know the more rain we have the better it is for us out here in California.

Lots to catch up on and I have some real pretty pics to share from a hike Dave and I took a week ago.
First let me say my wrist is better, yay!


Also my son got home safe from his 6th grade trip and he had a great time.  They went to Camp Ocean Pines in Cambria.  One of the first things he said was how good the food was and the head chef was really nice.  The chef told Keaton that he was the first vegan to cook for.  Every night when Keaton went into the kitchen to get his dinner the chef would ask Keaton questions about being vegan.  Also the last two mornings he was served pancakes and french toast( which I was told had bananas in it)so anyways, he thought that was pretty cool.  So being vegan has it's perks! hee hee. Last year in 5th grade and for summer camp he went to Rancho Allegre, which is close to us, and the "Naturalists" there are either vegetarian or vegan so Keaton would eat what they did.  So for dinner he would go to the kitchen to get his meal, which he thought was pretty cool and special.  He ate like, stuffed acorn squash and portobello mushrooms and pasta, sound like meals and a nice restaurant doesn't it?  It's so nice to know that when my kid is at camp he isn't going hungry. 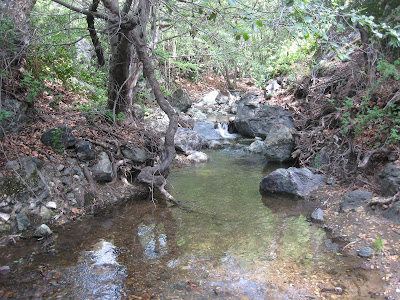 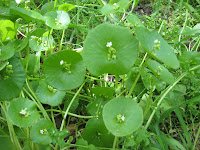 So here are some pic's of the hike we took up in the Figueroa Mountains.  The cool thing about many of the areas where we hike, there are parts that are shady and those grow tons of ferns all those pretty shade plants.  This one to the right looks kind of lilypad like, it felt a bit on the rubbery side. Then when you get into the sunny parts of the hike the plants change.  There is alot of water coming down from those mountains. 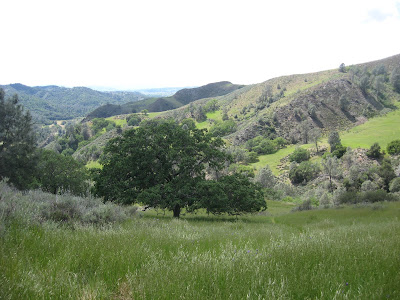 Before heading up the mountain. 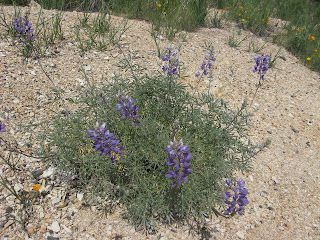 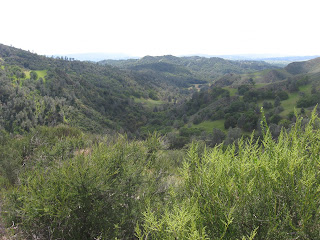 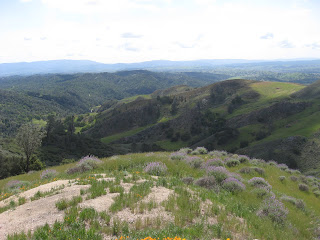 This is a view from the highest point we hiked to.  We want to go to the top which is probably an hour longer to get to. 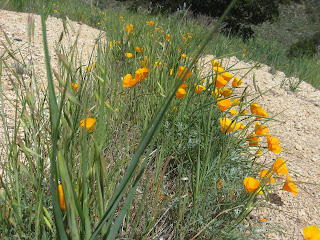 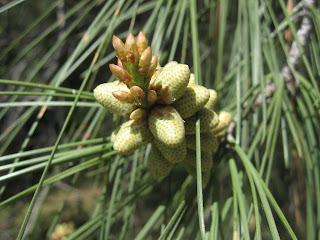 The beginning of a pine cone. 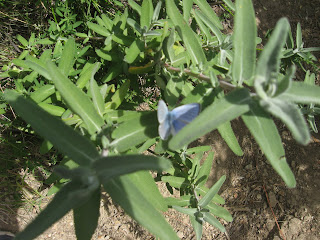 There were a few of these pretty blue butterflies in this certain area. I must finish the post with a tasty quinoa salad.  The ingredients are listed below.
In a small bowl mix together
2 C. quinoa, cooked
1 small red bell pepper, diced,
3 scallions, chopped
1/2 C. celery, diced
black olives, chopped
1/2 C. sprouted firm tofu, diced
then pour the vinegarette over and mix well
vinegarette:
extra virgin oilive oil
rice vinegar
agave
s&p
Eat at room temp or cold.
Enjoy the rest of your weekend!
Posted by dreaminitvegan at 10:30 AM