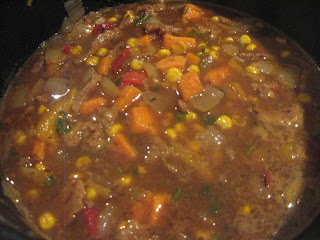 My mother-in-law subscribed me to Better Homes and Gardens a while back and I found this recipe last month that I've been wanting to veganize. The magazine itself is adding more vegetarian recipes but many are not. This recipe is actually called Sweet Potato and Hominy Stew. Hominy can look a bit scary looking, it is actually corn without the hull or processed corn, not everyone likes it and if you do you have to really be in the mood to eat it. So I decided to use corn to replace the hominy. Below are the changes that I made to the recipe. The stew has a nice sweet and subtle flavor you can also add beans if you'd like.

Directions
First prepare the seitan. If you are using pre-made slice up and add bbq sauce. If homemade seitan, I made the seitan cutlets from VCON and then browned in a skillet. Next I sliced 4 of them and added bbq sauce. Let it sit for at least 3 hours.