How sweet and fluffy you are!

I'm talking about cinnamon rolls not my kitty cat. hee hee.  Since we really didn't get to eat any of the cinnamon rolls I made for the bake sale last week and  my in-laws are coming in to town for the weekend, I thought it would be a nice treat.  I made some last night, with the help of my son.  He really enjoyed punching the dough down after it was done rising.  Anways, he got to roll, sprinkle and cut up slices.  I swear he would've eaten them raw. blah! 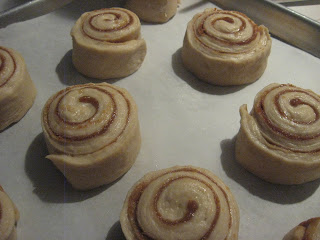 These are when we just put them on the baking sheet to rise a second time. 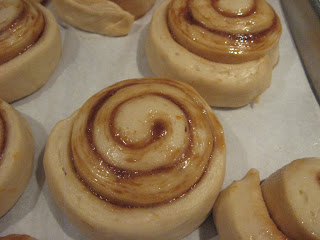 These are after the second rise right before being baked. 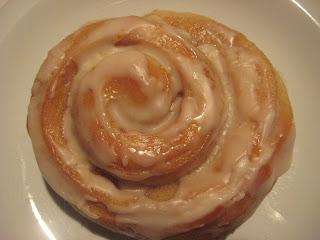 The finished product!  Yum.  You could actually eat these without the glaze on top. Maybe a sprinkle of powdered sugar and cinnamon would do if you don't like them too sweet.  The recipe is from Veganomican and are called Maple Sugar Rolls or something like that.  I didn't use the cardamon they call for in the dough but I did add some cinnamon to the brown sugar for the filling.
I better finish straighting up the house for our guests.  My son will performing at the school talent show tonight, a Metallica guitar medley he put together a couple of days ago.  Yep, nothing like last minute!  Anyways, it should be fun, the 6th graders have a 6 week session of vocals so the instructor is having them perform a Shania Twain song "Man! I feel like a Woman" and the boys have to dress up as girls.  He is not liking this at all but it should be very entertaining. lol! Along with all the other performances tonight.
Have a great weekend and a fun Super Bowl.
Posted by dreaminitvegan at 11:42 AM