A week with my brother and nephew, it was really nice. My nephew, 4 yrs old, likes to go see the buffalope(buffalo)as he calls them, and he was able to pet some sheep. I did too!  They were so cute!  My nephew also loves "tofood" or what you and I call tofu. LOL!  They left to go home on Friday, then my mother-in-law came up late Saturday night to use our computer then left early Sunday.  She and my father-in-law will be back up on Friday for Keaton's Science Fair.  Next?!!!!   We have rooms available on....jk!  We love having visitors. 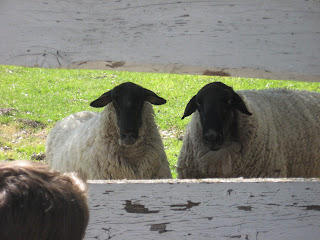 Here is a brief run down of our St. Patrick's dinner.  My mother in law used to make a corned beef and cabbage for my son years ago and he loved it.  So when Keaton became vegan I told him I would rally up a recipe for him to make him something similar.  My first go around with making the meal was okay.  The second go around, jack pot!  So this year I used the same recipe and it was a hit again with the kid.  My brother even had some and said it was pretty good.  The corned seitan recipe from Vegan Dad was made the previous day.  I didn't have any allspice or juniper berries so I didn't add that and I didn't use as much seasoned salt.  Then for the stew part I used Susan's, Corned "beef" and cabbage recipe at Fat Free Vegan .  I just added a bit more herbs in this and a bit more wine.  I actually think it turned out tastier than last years. 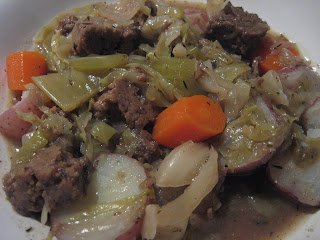